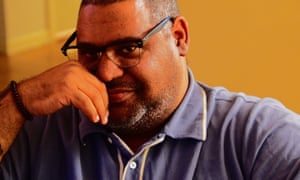 It was lovely to write this profile of Chris Abani, a writer whom I have long admired and respected, for The Guardian.  From the profile:

“When a war is over, it takes another 10 years for a war to be really over,” the novelist and poet Chris Abani says over the phone. “And so I grew up in the detritus of that war; it is something that has haunted me for a long time.”

Abani is referring to the Nigerian-Biafran war, which began in his home country in 1967, when he was 18 months old. Although the war lasted less than three years, it proved a deep influence upon Abani’s life. “I remember things like, as an 18-month-old, having to hunt for snails and bush meat,” he recalls. “The perennial smell of mud and dirt and dying things.”

The war is not the focus of Abani’s recent memoir The Face: Cartography of the Void, but rather an overarching ghost hovering in the background of Abani’s life. “I was born just a few weeks before the civil war arrived in our town,” he writes in one of The Face’s few direct mentions of the conflict. Instead, The Face is more of a deconstruction of the many personal, familial, ethnic, cultural and social forces that have shaped Abani’s life. Released as an ebook in 2014, The Face was published in print with a new cover by the graphic artist Kristen Radtkein the spring of 2016. This year also sees the release of New Generation African Voices: Tatu, a volume of poetry Abani coedited with Kwame Dawes as one of their many efforts to highlight contemporary African literature.”

Mr. Abani said so many brilliant things that it was a struggle to cut the piece down to the required word limit. Really fascinating were his thoughts on the African middle class and the need to provide access to the writing of those Africans who are not so privileged. Read the rest of the piece here: